Fife Writes first event, held in The Woodside Hotel in Aberdour in April, attracted 38 people. Tom Hubbard was our speaker / performer – everyone enjoyed his Parcel of Rogues.

Our second event in Betty Nicols pub Kirkcaldy in May was also a success. An audience of 32 enjoyed 12 people giving exceptional Open Mic performances that would rival any theatre. Rachel McAlpine provided mesmerising music.

Some members enjoying themselves

Our third event was in the Lomond Hills Hotel in Freuchie in June where an audience of 44 enjoyed performances from Lindsay McGregor, Eleanor Livingstone and Helena Nelson, as well as Sonny Carntyne who provided inspiring music.

The fourth event in the King Malcolm Hotel in Dunfermline in July had an audience of 44 enjoy performances from Ross Wilson, Lindsay Reid and Robin Smith.  Maria sang exquisitely and Keira played the piano with delicacy.

Robin Smith performs his poems with much vigour

Our fifth event in The Woodside Hotel in Aberdour in August was also a success. An audience of 40 enjoyed Tom Hubbard, Suit and Pace, and Joel Mason giving exceptional performances. The Sairbanes provided unique songs – their music written with the words of poems by local poets.

Joel Mason tells tales by singing and playing his guitar

Click here to listen to the Sairbanes sing the Pledge, a poem by Maureen Sangster

Our sixth event in the St Clair Tavern in Kirkcaldy in September was a success. The audience enjoyed 14 people giving terrific Open Mic performances with Lilian providing enchanting music. 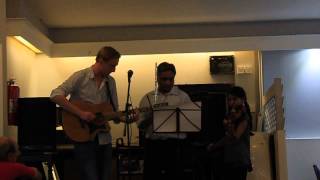 Click here to listen to Andy, Hamish and Esha sing and play “Staine”, music composed by Andy, written and arranged by Hamish

Our seventh event in the Ship Tavern in Anstruther in October was a success. The audience enjoyed Paula Jennings, John Quinn and Helena Nelson give superb performances and The Never Evers provided music from the heart.

The Never Evers sang from the heart

This guy was moaning a lot! What does he think this is, Halloween?

Our eighth event,  on 22 November, was a Fife Writes does Book Week Scotland Wordcraft Workshop held in the Galleries Activities Room in Kirkcaldy. Tom Hubbard, Poet, Novelist and International Lecturer gave us many tips and insights on the art of writing, all in an interesting and amusing atmosphere.

Tom, sitting, and the Workshop Attendees

Billy Kay tells his story in the Mither tongue, Scots

Unfortunately, our tenth event, due to be held on 11 December in the Lomond Hills Hotel in Freuchie had to be cancelled due to wintry weather. The performers you missed seeing were Linda Menzies,  Mark Thomson and Milton Balgoni, while Hamish, Esha and Andy were to provide music.